Bernard Beckett, Genesis and some of the best teen fiction you will ever read!

Confession: I'm a little bit in love with Bernard Beckett.

I first stumbled across Bernard Beckett when a friend gave me a copy of August for my birthday. Reading August was such a new experience – a YA different from any I’d ever read – that I immediately went out and bought Genesis, Beckett's best-known novel. It sounds stupidly simple, perhaps, to say that I am a fan because reading his novel was a 'new experience', but in the current market, finding a novel that offers something completely different, something surprising, is rare, and having read my second Beckett, I think I'm probably right in saying that rare is something he consistently manages.

If you've never read Beckett, you should know this: he writes unique books.


These books are intricately-woven: stories about people and circumstances, love and hate, faith and religion, history and the future. 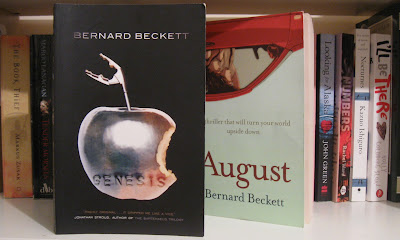 Take August, for example. On the surface, August is about a teenage boy and girl who are stuck in an upturned car following a crash, left to keep each other conscious all night by telling their stories. As we, and they, learn their stories, they start to weave inescapably together.

Underneath all that, though, is a brilliant mind at work. Beckett deftly weaves in complex discussions on philosophy, religion, faith and free will, all in a way that is necessary and relevant to the plot and characters.


Genesis does the same sort of thing. The story centres on Anax, who is taking an examination in front of a board of her peers. If all goes well, she will find herself a member of the Academy. The book has an unusual format – it is essentially a transcript of Anax’s conversation with the Examiners. When I think about it, this format shouldn’t work at all! It shouldn’t be captivating or interesting or unputdownable, but it’s all of those things.

As the Examiners set about asking Anax a series of questions on her chosen subject, you get wrapped up in the history of the world she finds herself a part of, and you start to find out a little about what Anax believes her place in that world is. 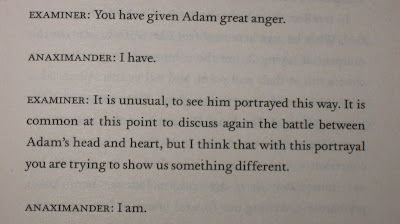 The unusual format of Genesis


Her chosen subject is Adam. Adam was a man who brought about the downfall of an entire society, and Anax is endlessly fascinated by him. As she answers question after question, we learn more about Adam, but also more about Anax’s obsession with his life. Into this scenario, Beckett weaves a discussion on society, economics, government and Artificial Intelligence.

Even as I write those words, I wonder how Beckett has turned such a thing into a book so full of magic as Genesis, but he has. He is a clever, clever writer. Everything stitches together, everything adds up, and every sentence boils with intent and thought. As Patick Ness puts it on the cover blurb: “A very different Young Adult novel... that will make smart teenagers feel very respected."

I couldn’t agree more. but I also think it's a fun, thrilling, absorbing novel, and I for one am off to find more like it!