Let's face it: a lot of the recent big commercial YA fiction has been written by women. The ones you hear about in the news, I mean. The ones that turn up at the cinema. Stephanie Meyer, Suzanne Collins, Moira Young. What are the boys doing while all this is going on?

Writing some genius fiction, that's what.

When you step into the world of contemporary realism - gritty, honest books - you find that guys own a HUGE chunk of the limelight. Seeing as I blogged a few weeks ago on my favourite kick-ass girls, I thought it was about time I ventured into the world of boys! (Read into that what you will...)

So just for you, here are some of my favourite books written about guys, by guys. 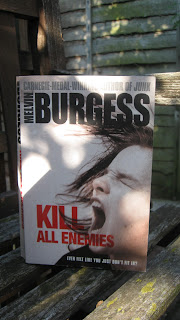 1 Kill All Enemies, by Melvin Burgess. Melvin Burgess is a God amongst contemporary YA authors. He's a flipping genius - one of those authors most people know of, but haven't always read. (If you haven't read any of his books before, go and find one, even if it means stealing one from the nearest stranger.) Kill All Enemies is his most recent, and I loved it. The story is told by three characters: Rob, Chris and Billie. They're all stuck in various cycles, carrying them further away from the people they'd like to be and the lives they'd like to have. Burgess never goes easy on anybody. He throws stuff at these guys until you are gasping for breath at their fortitude and, well, balls. At the same time, he has a certain knack for pinpointing the humanity in everybody. People just like these characters exist - they're out there, fighting against the rest of the world, and that thought is terrifying - something Burgess isn't afraid to play on.

"Isn't it amazing how just thinking something can change your whole life? That's what a miracle is. Not flashing lights and choirs of angels and people coming back to life. It can happen in a moment and no one would ever know but the person it's happening to." 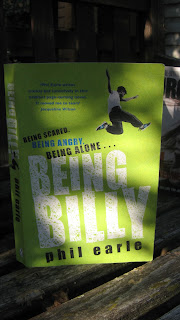 2 Being Billy, by Phil Earle.  I was given this for review, and it quickly (like, within about 20 pages) became one of my favourite debuts of 2011. Make no mistake, this is an AWESOME book. There's something unbelievably stark about this novel - you can't escape the hell that has become Billy's life. He hates it, and the worse it gets, the harder he fights. And boy, does he know it. You sense right from page one that Billy is just waiting for someone to offer to save him, but you also sense that as soon as they do, Billy will fight them all the way. Considering that Earle doesn't pull back from the tough stuff, he is capable of absolutely pummelling you with emotion. Every time Billy talks to his twin brother and sister, you want to leap right in, scoop the lot of them up and put them somewhere the world can't reach them any more. Surely even the most manly of manly men will be cuddled up with the kleenex by the end?

"My arm was sore. But, to be honest, everything aches after a restraint. Not just your muscles either, your brain, your guts, everything. It's difficult to explain. You feel lopsided, out of kilter, just wrong." 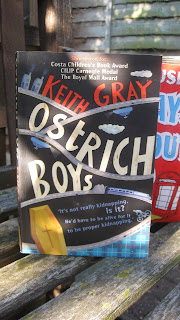 3 Ostrich Boys, by Keith Gray. I don't know what it is about Keith Gray. Every time I pick up one of his books, I get sucked in before I know what's happening. Ostrich Boys opens with Blake, Kenny and Sim hiding in a garden with a can of spray paint, desperate to do the right thing by their best friend Ross, who died after being hit by a car. They're angry - his funeral was depressing, not fit for Ross at all. So the three boys make a plan: they'll take Ross to Ross, and so begins the sort of adventure you'd expect when 3 teenage boys embark on a 250 mile journey carrying an urn full of ashes. There are a lot of surprises along the way, though. Blake, for a start, isn't your typical main character. He's seriously overweight and uncomfortable with himself, but he's brilliant, and as much as he puts himself down, you hope he isn't too far from seeing just how brilliant he really is.

"Our best friend Ross was ash in a jar. Ross was dead. Kenny, Sim and I were learning to live with it." 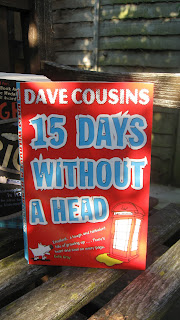 4 15 Days Without a Head, by Dave Cousins. Small confession. I got a review copy of this late last year (it was officially published earlier this year), and soon afterwards went on to meet Dave Cousins at a conference. If you are reading this, Dave, I apologise. I gushed. This book is GENIUS. I love it. I envy it. More than anything, I wish it had been around when I was a teenager. Fifteen Days is the incredibly well-told story of fifteen year-old Laurence and his little brother Jay (who thinks he's a dog), and the day their mum doesn't return home after work. They're left to fend for themselves - or rather, Laurence is left to fend for the both of them. This is a funny, genuine, heart-breaking window into the life of a modern teenager, and you won't want to put it down. Ever. (As a small side-note, the introduction to Laurence and Jay's mum is one of the best character intros I've read - seriously! I recently found myself surrounded by writers for a weekend, and that character intro is all we were talking about. Well, that and cake.)

"By the time I get to school, the playground is empty. I've missed registration and assembly has started, so I have to go to the office and sign the Late Book. I make it back just in time to join the queue lining up for first period - out of breath and sweating like a kebab."