What is YA for? Code Name Verity - a world reflected

I was going to blog this weekend on YA fiction in general, and what makes YA distinct from adult fiction. Then I read Code Name Verity by Elizabeth Wein, and I started thinking harder about the purpose of fiction for younger people. Just as I was coming to the end of writing this post, I also read this nice post from Celia Rees on the same topic. 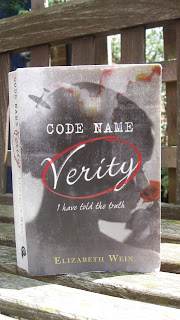 Aside from being a brutally honest, funny, gutsy book, for me personally, Code Name Verity does something else: it highlights some of the many, many ways in which YA fiction can, at times, beat adult fiction out of the water without so much as strapping on a life jacket.

Code Name Verity is historical YA. It's the story of two unlikely best friends, set in Nazi-occupied France, and is told from the point of view of a young Resistance agent who has been taken captive by the Gestapo.

And yet the one thing a YA must absolutely do, is connect with teenagers now. It must be about something, or someone, that young people can relate to. Code Name Verity manages exactly that, with room to spare - for all of the historical correctness present here, there is something remarkably modern about it.


The main character, who refers to herself in her writings as 'Queenie', is ballsy, reckless even. But she also hurts. She is heart broken at everything she has lost, and heart broken at having had it all in the first place. She's terrified, and not because she's been tortured and lives in fear of death or worse, but because she doesn't know what's around the corner. She's in the dark (often quite literally), her future on the line, because she has taken a huge gamble: she has agreed to tell everything she knows about the British war effort in exchange for time, because knowledge is the only thing she has left to bargain with, and time is the only thing the Gestapo are willing to give. Queenie is strong, but she doesn't always know what to do with her strength, or how to deal with the aftermath of using it. She makes mistakes, and isn't able to correct for them.

Those feelings  - of helplessness, of being forced to bargain when you have very little to offer, and the certainty that your life belongs, at least for the moment, in other people's hands - are very familiar ones. They are virtually the hallmarks of being a teenager.


But teenage readers, of course, need other things too - exactly the same things that any other reader looks for. Complexity,  depth, something to challenge and provoke. When reading a book about lives during WWII, particularly the lives of younger people, there are expected hardships. Resources were scarce, lives were lived in fear, death and torture were prevalent, and human nature was tested and stretched as far as it can go. A good novel explores these things.

A great novel, however, holds up a mirror, and tries to show what's on both sides. The intricacies, the subtleties, the waxing and waning of possibility.

Through both Queenie's and her best friend Maddie's voices, this is precisely what Wein does. She shows the other side of the mirror, however cracked it might be. Through Queenie, Wein forces us, from the corners of our eyes, to look at the Gestapo interrogators, to see their pasts, their futures, their own hardships and deepest wishes. We are forced to face the full spectrum of humanity each person holds within them, and the way in which circumstances can so easily define who we are.


As a teenager, it's very easy to judge the world around you, hate it even. Having the ability, patience and willingness to see through to the other side of the mirror is an incredible thing, and what fantastic books do is show that that ability is worth fighting for with everything you have, even if what you have is very little. I think the true importance of YA books like Code Name Verity is that they show the possibility for humanity and worth of self, no matter who you are, no matter how old you are.

So does YA fiction have a purpose? You bet your teenage years it does.