The Great Meg Rosoff - Where Better To Start?

It should be said that I like all kinds of children's books. Whilst I prefer the serious ones - stories which tackle questions in life bigger than 'I wonder if he's going to bite me' - I'll read most things. (Except Stephen King. That guy's books just freak me out.) I even read Twilight once upon a time.

Being reasonably widely-read in children's fiction helps on the occasions that I help out at my local bookshop. I am steered away from the grown-up section lest I accidentally recommend Jodi Piccoult to someone who's come in asking for something similar to Jo Nesbo. But in the kids section, I'm allowed to roam free.

The most common question I've had whilst standing admiring the shiny foil insets on covers and the newest sparkly Big Thing, is "My daughter is addicted to vampire books. I'd like her to read something a bit different - something a bit more... erm... you know. What would you recommend?"

This is followed by a short Q & A session along the lines of:

There are a couple of options for responding to a request for something that's like Twilight but isn't Twilight, and something that's like Twilight but not as... erm... you know. Of course, you could recommend another paranormal book, but where's the fun in that? Besides, Mum wants something a bit different - something Daughter will like, but that will ultimately get her thinking about something other than where it might be possible to find a house full of vampires living in Oxfordshire. (Not that that isn't fun.)

Given no other information about Daughter, the first person I point Mum towards is Meg Rosoff. Even if I do have Daughter knowledge, I still tend to look to the same place, because there's a Meg Rosoff for everyone. (And yes, that includes all you grown-up people.) 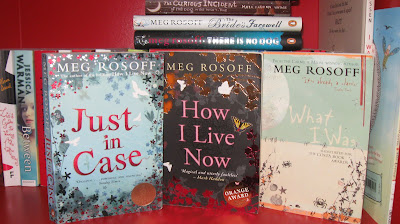 Here's why. Meg Rosoff writes absolutely awesome books that mean something. They're a little bit special. I suspect if anyone pitched one of her plots, they'd get raised eyebrows and something along the lines of "Are you serious?" She's written five novels so far, gathered several awards and a loyal set of followers. All of her books are written for teens, but her adult fans must be just as numerous.

Meg Rosoff writes about teenagers in a unique and brutal way. She understands them, doesn't patronise them, swears like a trooper and doesn't care for rules. As Daisy, the main character in How I Live Now, says, "This is one of the things I most dislike about nature, namely that the rules are not at all precise." Rosoff allows you to think she's following the rules, then twists away, leaving you as vulnerable as her characters.

As for her characters, they're never obviously strong. They're led by many things, but rarely other people, in the manner of a lot of teen fiction. Emotions, sure. Need, want, desire, fear, sure. But they have their own minds, wherever that winds up taking them, good or bad. They're spiky, resilient, funny, sharp - the teenagers you always wanted to be. They're extraordinary, but haven't got a clue how to be, and aren't in a position to bother giving it a go anytime soon.

When you pick up one of Rosoff's books, you never expect to find a teenager having to save the world. There's no baddies (apart from hormones perhaps, and nobody likes those) and no convenient escapes. Pretty much like everyone else's experience of the world, really.

Oh - and nobody has especially sharp teeth.


Where better to start with teen fiction than that?

p.s. If you haven't ever read any Meg Rosoff - well, why the hell not? Go and fetch yourself a copy of How I Live Now. After that there's another four to choose from, you lucky thing: What I Was (my personal favourite), Just In Case, The Bride's Farewell and There Is No Dog. How I Live Now is currently heading down the movie path, too. Just in case you wanted to know.
Posted by Jo Wyton at 3:06 pm