Books Within Books - Hiding one world within another

As if offering up one world on a plate wasn't enough to quench readers' thirst, some books can't resist offering up more than themselves. You open the front cover expecting one book, and instead: you get two. Or three. Or several. These books are the hussies of the literary world, shamelessly name-dropping titles and characters in the name of storytelling, absorbing other titles and plots and characters into themselves.

It's a tactic I love.


Especially when the author references a book you've read. It's a chance to feel like you've been wrapped up in the book - it's taken you in. (And it's a chance to feel just a little bit smug that you understand the references and in-jokes.) After reading this piece on the Guardian website by Julia Eccleshare, I've been tempted to find some of my favourites... 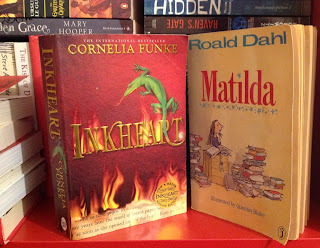 There's the obvious ones - Matilda and Inkheart. Reading Matilda was how I first heard of Moby Dick and Charles Dickens. And I loved how much she loved books. I have no idea how much I liked books before I read Matilda, but I know that once I started reading it, I fell in love, and it's a love that will never grow old. (It also taught me that liking books is OK. Actually, it taught me that liking books is pretty darned cool.)

I came to Inkheart much later, but I wish I'd read it as a kid. The quotes at the start of each chapter would have made me feel so included and smart, and Meggie and Mo, live for books. 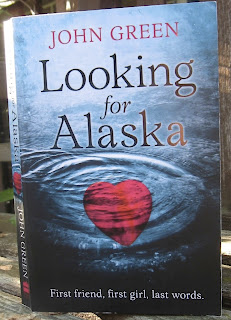 Using books within books does lots of things. If you've read the books, it makes you feel included. If you haven't, it makes you feel like the characters (and by association, you as the reader) are smart. Often, it's a trick used to amplify an aspect of the story. It might be a character's infatuation with Romeo and Juliet, for example, or Pride and Prejudice or Wuthering Heights. In fact, when it comes to teen fiction, it's usually one of these. I'm not sure why exactly - perhaps because they are books and plays that most teenagers would recognise and still think are intelligent.

Looking for Alaska, by John Green (I swear, one of these days I will write a blog and not mention John Green) (ALL LIES) provides a window into his own love for literature and writers. One of the main characters, Alaska, has an obsession with books, in particular The General In His Labyrinth, by Gabriel Garcia Marquez, and the main character himself is caught up on people's last words. Both characters' literary fixations play an important part of the story, reflecting on both the characters and the plot.

Rainbow Rowell's Eleanor & Park is a little different, using comic books, especially the X-Men, to connect the two main characters, b
oth of whom feel different and alien. I've never read a comic book, but darned if I didn't want to by the time I'd finished with this book. (Which I haven't reviewed here yet, but I'd recommend it with everything I have.) 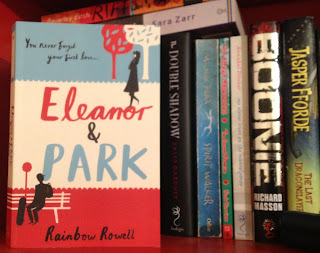 And then there's one of my all-time faviourites: The Princess Bride, by William Goldman. It's a bit of a cheat, because it doesn't contain a real book. But it's so genius in its execution that I had to mention it here. It's a true book within a book. Goldman's aim was to abridge the original The Princess Bride, by S. Morgenstern, which contained too much description of scenery and history for Goldman's liking. So dotted throughout the book are Goldman's notes on what he's cut out and why.

But of course, S. Morgenstern doesn't exist, and neither does his original book. It was all about Goldman playing around with the value that we put in books and stories. It's incredibly fun and has fooled an incredible number of grown adults (which only makes it more fun).

Mainly, I suppose, writers are book fans, and some of that is bound to seep into their stories, and how can characters who love books ever be a bad thing? More, I say, MORE!

Email ThisBlogThis!Share to TwitterShare to FacebookShare to Pinterest
Labels: Books Within Books, Eleanor and Park, Inkheart, Just One Day, Looking for Alaska, Matilda, Middle Grade, The Book Thief, The Fault in Our Stars, The Statistical Probability of Love at First Sight, YA