I'll Be There - A new perspective in contemporary YA fiction

It isn't very often that you come across something that feels entirely fresh and unfazed by the market. So, when those moments come along, you treasure them. Last week I was lucky enough to have Holly Goldberg Sloan's I'll Be There recommended to me, and it didn't take long for me to realise I wasn't going to be able to put it down any time soon.

I'll Be There is a love story, hidden deep in the folds of a family drama, and reading it really does feel like you are discovering something entirely brave and new. The story revolves around Emily and Sam, two teenagers who meet one day at a church. Emily's father has forced her into singing a solo, and she's dreading it - the only thing she is confident about it that she has a horrible singing voice. Hearing the pipe organ playing from the street, Sam walks into the same church, and takes a seat in the very back row. 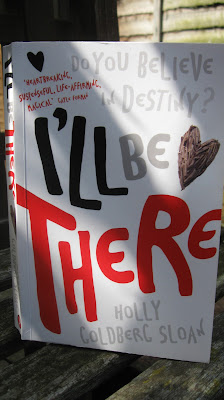 From here, chance encounters and decisions made in the moment forge a path down which Emily and Sam are guided. This is a book written from an eagle-eye perspective, swooping down on character after character, each providing a small piece of the puzzle, from Sam's younger brother, Riddle, to his dangerously unhinged father, including along the way a black bear, a cattle driver and a hotel cleaning lady. Every character is observed in beautiful, subtle detail. Take Riddle, for example. Riddle is autistic, but we are never told. Instead, through scene after scene, we are shown how he likes to carry a telephone directory around with him in which he draws intricate diagrams of machines and engines, and how he bonds with Emily's family through the dog and her mother's 'dump cake'.

The story is told by a removed narrator who seems to have no emotional insight into the story he is telling. For some reason I cannot fathom, even after reading this book twice, I can't shake the feeling that this adds to the book's emotional depth. The perspective is so emotionally removed that the big scenes deliver a huge punch, more so than most first-person narratives, and if you're anything like me, you'll be dying to read it again soon after you've finished it the first time.


Sloan invites the reader to judge characters by their actions, not their thoughts, and there is something incredibly admirable about that. By viewing Emily and Sam's world from the clouds, Sloan is able to trace fate's path through their lives, examining each and every person who makes an impact on their stories.

I'll Be There seems to me an extremely important and interesting addition to the world of contemporary realistic YA, and I've spent the last few days heartily recommending it to EVERYONE.