The Fault in our Stars, by John Green

Seeing as this is a blog about serious teen fiction, what better way to start than to review one of the books of the moment? I should warn you that I started reading this book at around 5pm yesterday, and I finished it three tubes, one train, a hurried walk home so I could start reading again and seven hours later. I may have been close to slipping into unconsciousness by the time I finished this last night, but apparently not close enough to stilt its impact. Not that I cried or anything. 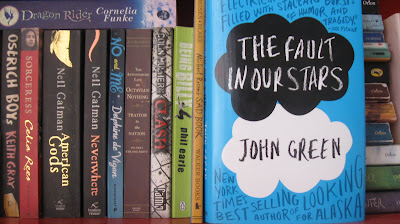 The Fault in our Stars is a book everyone who hasn't been living under an especially large, hibernation-inducing rock has heard about. Like a lot of teen fiction at the moment, it's everywhere, and its following is only growing. And yet - it doesn't have a UK publisher.

How does a book not yet published in the UK gain such a huge following over here?

Because it's freaking awesome, that's why.

Teen fiction does a lot of things. It has strong characters who suck you in, twisting plots that spit you back out and hooks you could hang a blue whale on. Serious teen fiction, however, does something else: it delivers a punch you rarely find in more commercial fiction.

It's often character-driven, for a start, which means that if you wrote down the (action) plot, point by point, you'd often have almost nothing written on the page in front of you.

What's left behind, however, are the characters, and their voices. And boy, does John Green deliver some voices.

Take Hazel, for example, the main character. Hazel is precocious. She's curious. She feels for her place in the world, and then takes the time to stand and admire it. Oh - and she has cancer. The inoperable kind. In fact, it's pretty much the can't-do-anything-about-it kind.

When Augustus Waters turns up at her cancer support group (held in the Literal Heart of Jesus), I'd like to say that everything changes for Hazel, but I don't feel that it does. You could say that it opens doors for her, but Hazel isn't the kind of girl who goes storming through open doors. Quite frankly she'd be happier reading a book. You could say it shows her the breadth of humanity, but Hazel is well aware of how strange and diverse people are. You could say she grows up during the course of the story, but Hazel is already 16 going on 30.

What it does do, is show us the world through the eyes of a dying teenager. It shows us how Hazel feels to find her first love, and how she feels as the world widens and then collapses around her to the sound of the BiPAP that keeps her breathing at night. It shows how she deals with knowing that the moment she dies, the people around her will be left behind to cope with changed lives. And let me tell you, she isn't exactly soppy about it.

Hazel is the kind of character that teen fiction exists for. She's resilient, but not fearless; gutsy but not heroic; curious but not all-knowing. She's the kid sitting on the bus next to you or the girl that lives down the street. She talks like a teenager, processes the world like a teenager and dreams like a teenager.

Which all means that when The Fault in our Stars reaches its end, we feel none of the characters have reached theirs, whatever and wherever they might be.

And that is what I love about serious teen fiction.
Posted by Jo Wyton at 3:15 pm